Do you have any kitchen fears? Is frying things one of them? If it is, it’s time to do away with that fear. Poof! Vanish it. Because while you sit worrying about oil splatters and fat intake and other nonsensical things like that, people all over the world are eating FRESH DOUGHNUTS. HOMEMADE. DOUGHNUTS!!! I know! When I figured that out, I was just as excited as you are now. Also, I wanted to fry everything.
Well, as it turns out, not everything is made to be fried. And sometimes, making your kitchen smell like a fast food place and using up half a vat of oil isn’t at the top of your to-do list, either.
But sometimes it is! And the day we came home from the apple orchard with 30+ pounds of apples, I knew what I  needed to make: apple fritters. It didn’t matter that the kitchen was already clean, or that I was tired. Fritters needed to happen! So I called a friend, asked her to come over, bribed her with the promise of fresh fritters, and boom! We were in business.
These fritters start with a simple, enriched and yeasted dough. It’s wet and sticky, spiced with cinnamon and held together with butter and egg. It’s beautiful. As the dough was rising, we made the apple filling. We cubed apples and softened them in browned butter, sugar, and spices. Already, we could tell that these would be good.
The risen dough was rolled out and spread with apples. My friend isn’t much of a baker, so I coached her through rolling, filling and cutting the dough and applauded her when she was done. Really, though, it’s a dough that’s easy for anyone to work with- soft enough that it puffs up wonderfully when fried, but hardy enough that it doesn’t tear apart when rolled or filled with chunks of apple.
We took a little break as the fritters did a quick second rise and then it was time to fry them. The first fritter was sacrificial- the outside was burnt and it was still raw on the inside. But slowly, we found our rhythm. The fritters came out golden, puffy and made the kitchen smell like any kitchen should, on any given fall night. We dipped them in a maple glaze and watched them harden.
And then, if ever we had any resolve, (and really, it’s criminal to resist a fresh! homemade! doughnut!) it fell away and broke into smithereens. We let go. And we ate fritters.
They were good! Very, very, very good! Sweet and crunchy with glaze, soft with a rich, but minimally sweet dough, and absolutely STUDDED with fresh, brown-buttered apple chunks, we quickly determined that these were so good that they needed to be a staple, but also so good that they couldn’t possibly be. We wrapped some up for our families and suddenly, within a few minutes, they were gone. Demolished! I almost felt like making more, but I do have some sense. 11 o’clock at night is not the time to start a fresh batch of doughnuts, although maybe, on a different night, I will argue and retract that statement. Very possible.
Anyways! Fritters! Make them. Now. You won’t be sorry. I know these will definitely become a yearly fall treat at our house. And if they do at yours, too, your house will quickly become the place to be.
What’s that? You’re making maple glazed apple fritters? Can I come over?

Adapted from The Kitchn

Why I love this recipe: a soft, slightly chewy and cinnamon scented dough is stuffed to the brim with brown butter and sugar softened apples. Once fried, these classic, autumnal treats are glazed with a simple maple icing that hardens and coats the fritters.

Notes: make sure you have a good deep-fry or candy thermometer, as the temperature of the oil is super important. Too hot, and the outsides will brown and burn, with the insides remaining doughy. Too low, and the fritters will soak up oil like sponges, becoming heavy and greasy. Trust me, I know from experience! Maintaining the temperature at 360° is imperative. Also, since the flavor of the butter comes through strongly here, use a good one. And use full fat milk, too. As for apples, I like a mix for these. Since the fritters are sweet, granny smiths are a good choice, especially when used in conjunction with other apples.

For the apple filling: 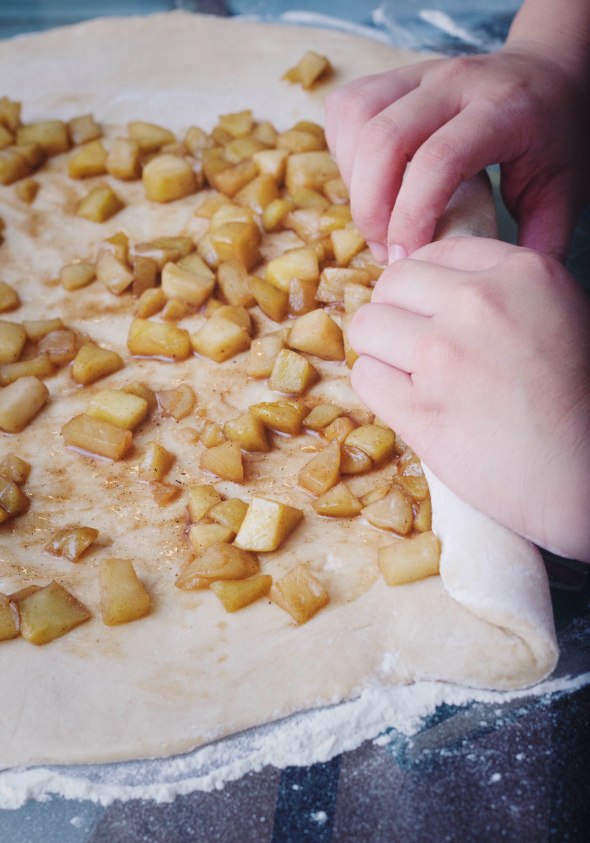 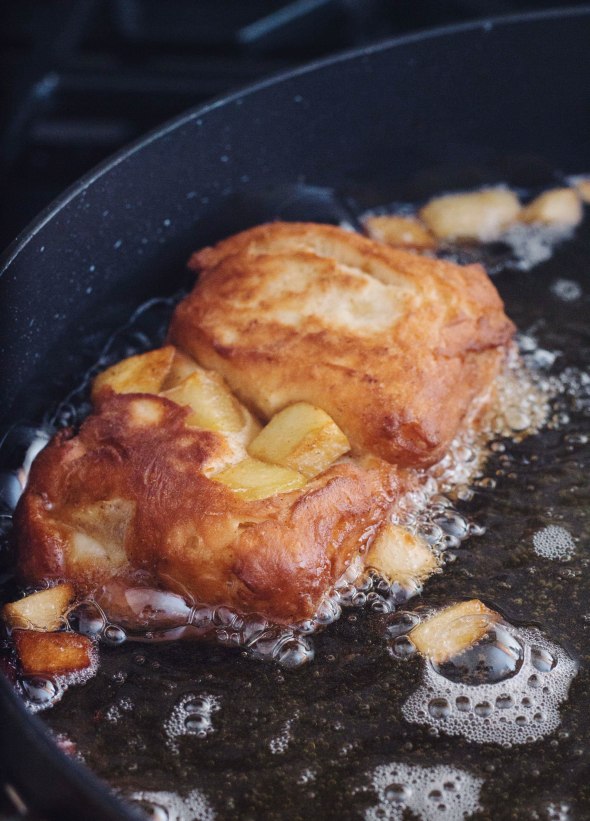 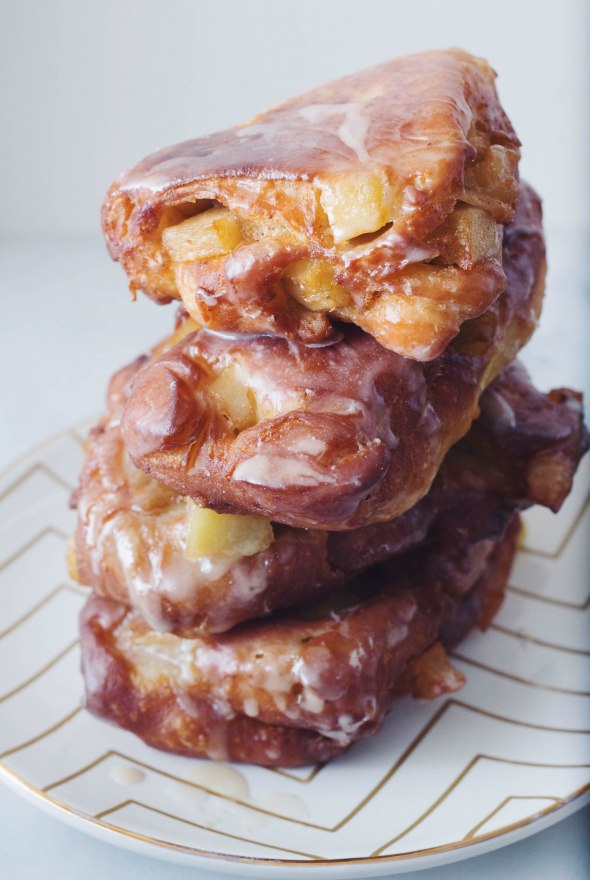 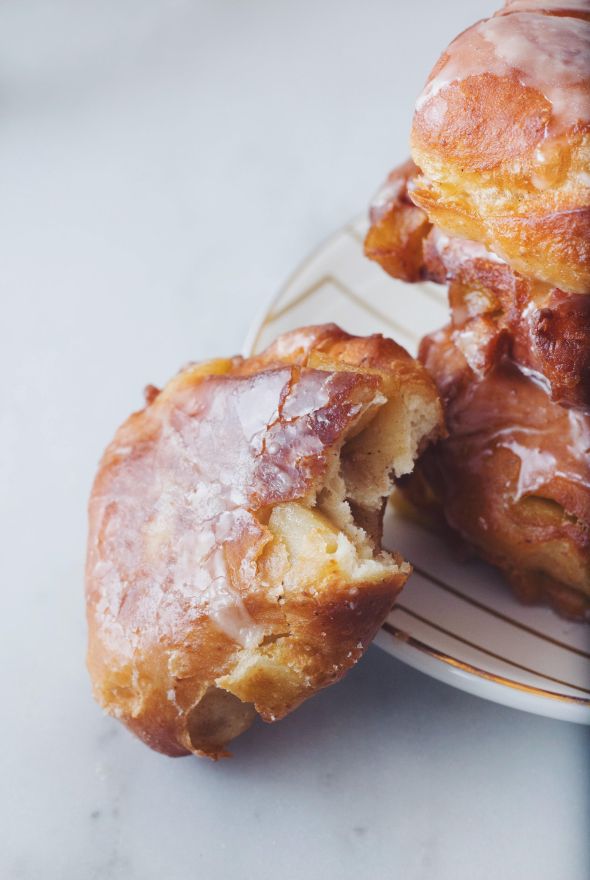