I discovered baklava in a chaotic, sun soaked market in Jerusalem. All around me, vendors shouted, loudly hawking their wares, and people selected their goods quickly, haggling briefly and hurriedly bagging their treasures.
In contrast, I stood still, lost in fascination. In front of me, sticky, syrupy diamonds were laid out on trays, sprinkled with crushed pistachios and mesmerizing in their layered height. They weren’t like anything I’d ever seen before, and couldn’t be more different than the homely rugelach they were placed near, but bewitched by their sweet, spiced scent and diamond shape, I bought one piece.
Over the summer, that one piece turned into many more. I became obsessed with baklava; with its spicy, cinnamon-y nuttiness, with its unique Middle Eastern elements (that flaky phyllo dough!) and with its sticky, chewy textures. Just about every visit to the Ben Yehuda market ended with a quick trip to one of the ubiquitous baklava sellers and a little brown paper bag, the contents of which my mother and I enjoyed on the bus rides home.
The memory of those wonderful treats has never left me, and I decided December would be a good time to make them at home. After all, they’re flavored with orange and spice, which couldn’t be more seasonally appropriate, and nuts are always in season, making these pastries a go-to in the midst of winter.
My version incorporates a few new elements but mostly sticks with the classics. I use a trio of walnuts, pecans and pistachios for the filling and layer the nuts between three layers of buttered phyllo dough. I brown the butter, which isn’t traditional, but I absolutely love the nutty, toasty flavor it imparts and find it strengthens the flavors of the spices and nuts in a really good way. The syrup consists of just sugar, as opposed to the combination of honey and sugar that’s sometimes used, because it makes for a clearer taste and also because it’s the way I had it in Israel. Otherwise, I added a few additions, like orange zest and vanilla bean, to the syrup, which amp up the flavor and add a lovely aroma.
This baklava is everything I want and remember: nutty, spiced, sticky-sweet, and chewy-flaky, all at once. It brightens and cozies these short winter days, and just a bite of the rich pastry is enough to transport me to sunnier, more carefree days. 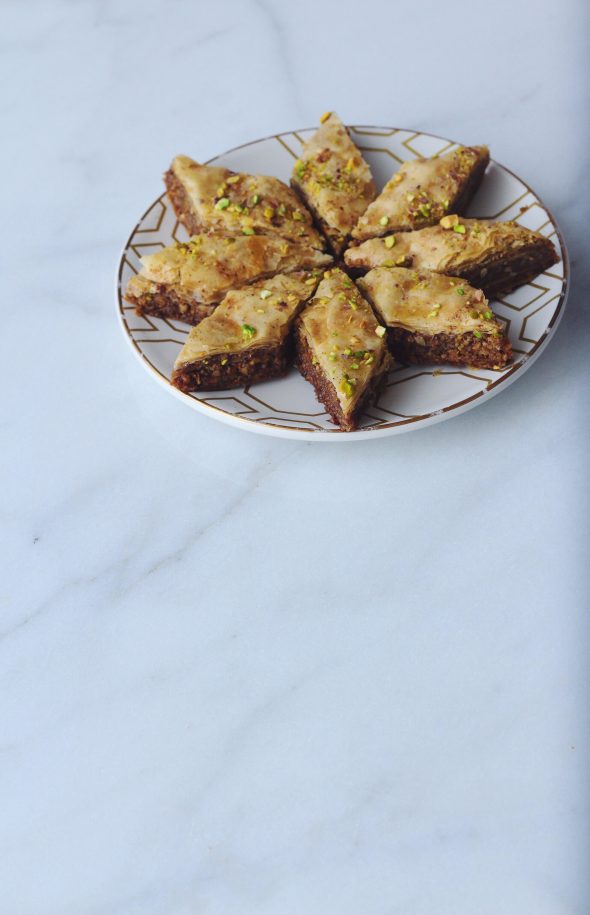 Why I love this recipe: this baklava uses a combination of my three favorite nuts and is brushed with wonderfully fragrant and nutty brown butter between layers. The syrup is flavored with citrus rind and vanilla bean, and using just sugar, instead of a mix of honey and sugar, promotes a clearer, sweeter flavor, allowing the nuts and spices in this flaky pastry to shine through.

Notes: you can use all of one of the nuts I’ve listed below, or a mix, as the recipe reads. I personally like a mix or all pistachio. When buttering the phyllo sheets, make sure you’re using a liberal amount, so the sheets stick together nicely. Use up to 1/2 an extra stick of butter if it’s needed, browned of course. The way to brown butter is by melting it, turning the heat up and letting it begin to foam and bubble. When a wonderful smell fills the air, and the butter looks clear and brown, turn the heat off, so as not to let the butter burn. These pastries are best the next day and last for up to a week! They develop even more flavor as time goes on.

For the syrup:
For the baklava: 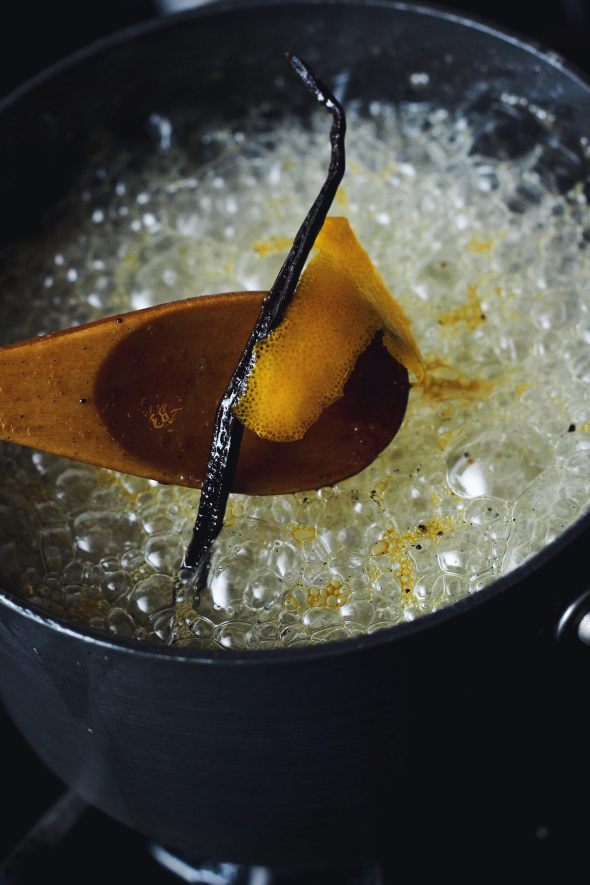 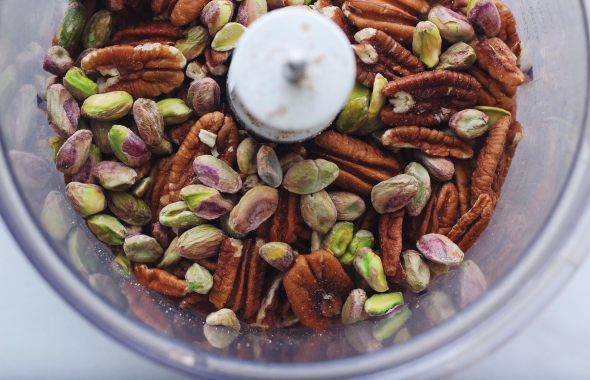 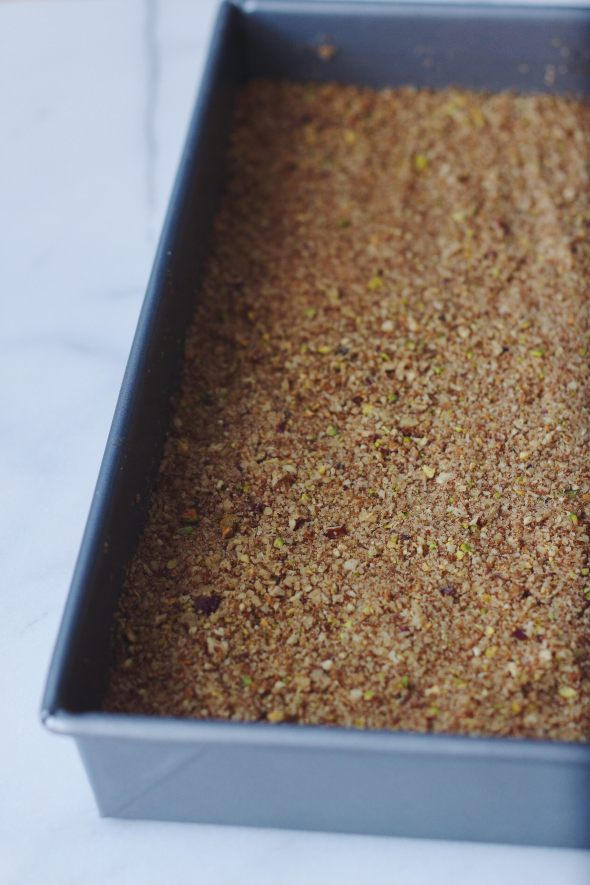 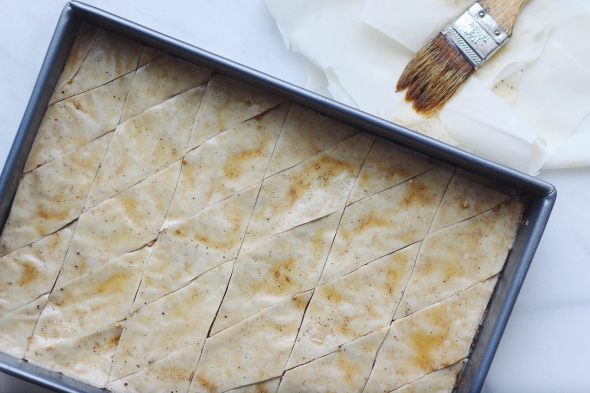 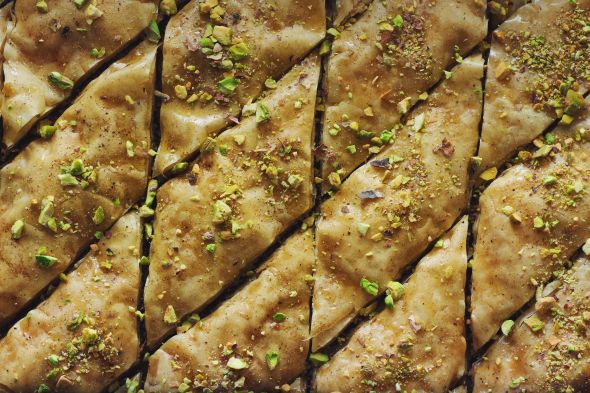 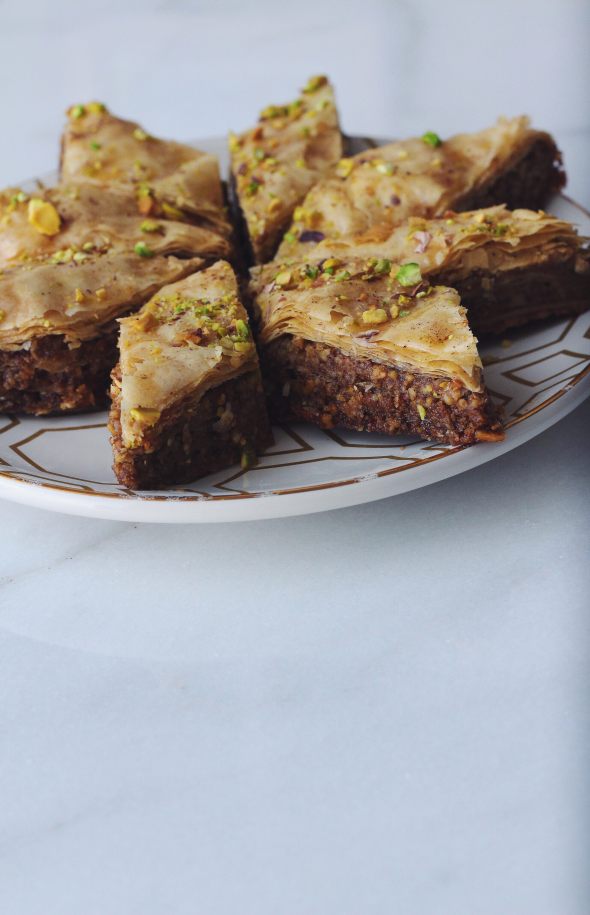