This Sunday, we took a trip upstate to pick some fresh fruits and vegetables at Ochs Orchard. The orchard was around an hour away, and the route there was scenic and surrounded by greenery. When we arrived, we were given a map to all of the different places where we could pick our own produce, which included fresh peaches, plums, tomatoes, blueberries, peppers, apples and eggplants.
We took a few cartons to fill with produce and started making the rounds. The first vegetables we saw were tomatoes; dangling from the vine, and some not yet quite red but a pretty shade of green and yellow, we picked a few tomatoes and tasted them on the way. They were incredibly sweet and juicy and unlike tomatoes we’d ever had. We picked apples which were crisp and delicious, and tiny blueberries which were full of flavor. The prune plums were still not completely ripe but had a tart tang which resulted in quite a few being eaten and the peaches were ripe, ambrosial and full of floral nectar. (I was banned from baking them into a peach pie because they were “so good they need to be eaten fresh!”.)
It was a beautiful way to spend the last day of August, and while I’m sad to see the summer go, I’m also excited to see what this fall has in store, especially since I’ll be going to Switzerland and Israel in October.
Enjoy the last of summer! Chaya 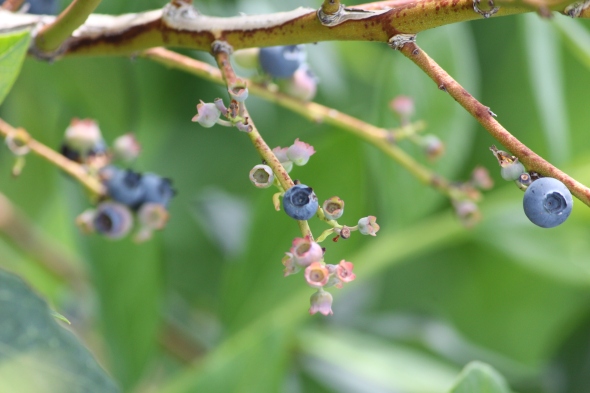 7 thoughts on “Garden of Eden”