Happy Chanukah everyone! Today I’m sharing a recipe for my favorite classic latkes. These latkes are flavorful, super simple and have a crispy golden crust, just like I love them. They’re made with Yukon gold potatoes for a nice buttery flavor, and a little bit of egg, fresh black pepper and sea salt binds the mixture together, with minimum ingredients for optimal flavor.
With a classic latke as the base, I decided on unique, savory toppings for these latkes: lox, dilled sour cream, sauteed shallots, chives, and a sprinkling of sel gris for crunchy texture. The shallot gives it a little sweet touch, the chives are refreshingly crisp, and the latkes are almost reminiscent of a classic brunch sandwich (go ahead! add a fried egg!) minus the bagel. These latkes are a delicious accompaniment to any meal, and a beautiful appetizer as well. Don’t forget to serve with doughnuts!
xx, Chaya

Why I love this recipe: draining all the liquid + cooking in smoking hot oil results in a super crispy latke. The latke itself is simple and classic, relying on potatoes only for starch, and Yukon golds lend a nice buttery flavor. 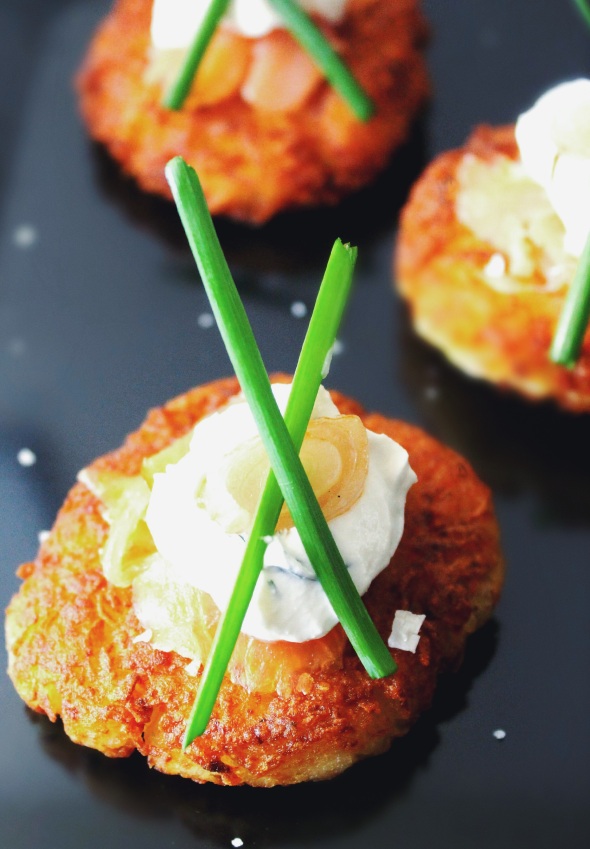